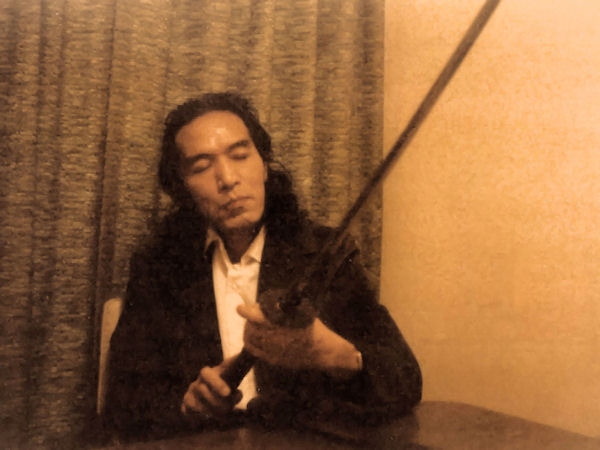 Mr. Nakajima Muneyoshi, who planted a seed from which a tree has rooted. He is the true founder and inspiration for Dragonfly Forge, whose skill and love of the Japanese sword continues to inspire others. 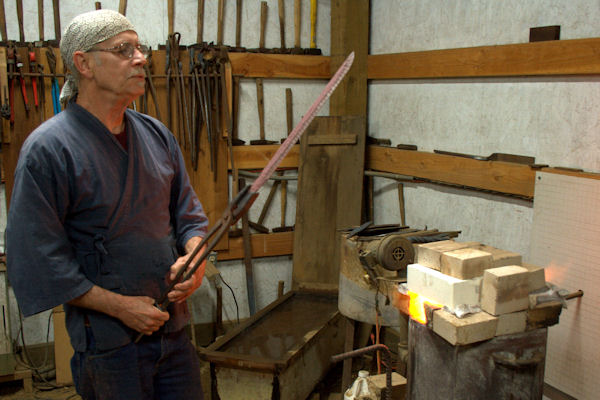 The master swordsmith and chief instructor at Dragonfly Forge is Michael Bell.

Michael was born in 1946, raised in California, Japan and Mexico, and grew up “making things”.

An interest in Japanese martial arts led to practicing kendo and iaido and eventually to Mr. Nakajima Muneyoshi.

Beginning in 1970, Michael began what was to become a five year apprenticeship with Mr. Nakajima. During this time he learned how to judge the quality of a sword and its’ mountings and how to restore the sword to its potential, both as a weapon and as art.

Because of Mr. Nakajimas’ broad training and experience in all the sword arts, from forging the blade to wrapping the handle, Michael was taught the skills necessary to create the whole product.

In 1987, Michael, along with his wife Anna and two year old son Gabriel moved to rural Oregon and established Dragonfly Forge, which continues today to forge and mount swords of the highest quality as well as teaching the art to others. Gabriel has since grown up, graduated college, and is now a practicing swordsmith working with his father

Michael has said that becoming a swordsmith is a calling, a passion, much more than a trade or profession. “I forge swords because I must”.

His blades have won numerous awards at major knife shows, as well as other honors. It has been Michael’s greatest honor to create custom works for clients worldwide throughout his sword journey. And while this brings him great joy, Michael will no longer be taking new commissions to become fully engaged in teaching the art of sword making at Dragonfly Mountain Swordsmithing School. 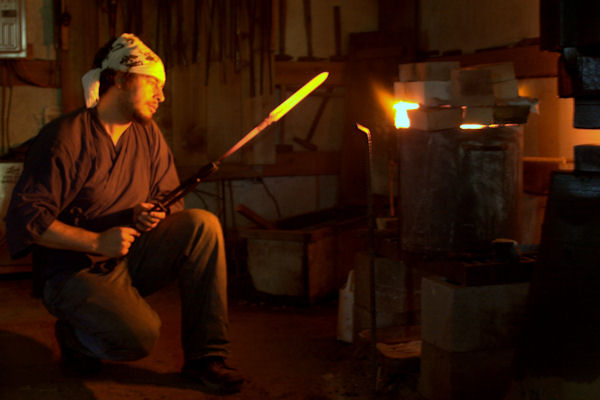 Gabriel Bell is the son of Michael Bell. Gabriel grew up in his father’s shop, learning how to work with his hands and Japanese tools. As a kid, he learned to forge knives. Japanese tanto soon followed. After high school in Coquille, Oregon, Gabriel attended college at Willamette University, working summer vacations with his father. In the spring of 2006, he studied abroad for semester abroad at Tokyo International University in Saitama, Japan.

A tanto by him won the Best Art Knife of the 2009 OKCA Knife.

In 2016, he crafted a fully-mounted Japanese-style spear, or yari, that won the Oregon Knife Collectors Association (OKCA) award for Best Damascus of Show.

Gabriel was invited to return to compete again on the series Forged In Fire in 2017.  He went on to earn the title of Forged In Fire Champion after winning Season 3 Episode 16 – Redemption.

John DeArmond was born in 1983 and lived in Japan, Germany and Florida as the son of a military family.

John came to apprentice at Dragonfly Forge in early 2003 after graduating high school. This was after many months of phone conversations and e-mails that demonstrated his strong desire to learn swordsmithing.

With the exception of a year in Toronto, Canada to study swordsmanship (Hyoho Niten Ichi Ryu) and Russian Systema, John has dedicated his efforts to Dragonfly Forge. He has proven to be an excellent instructor of the sword crafts as well as a talented artist.

Additionally, John has also earned a B.A. and learned to play the Irish fiddle.

We look forward to working with John for many years to come and to see his skills truly blossom.

One Reply to “About Us”